In the Presence of my Enemies (engelstalig) 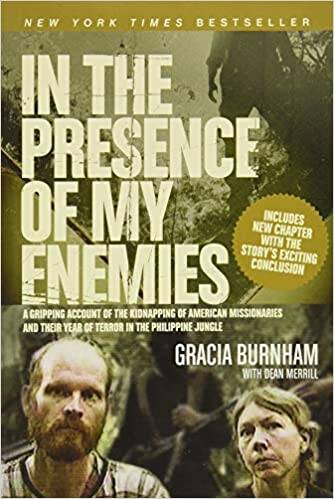 Can Faith, Hope, and Love survive a year of terror ?

For American missionaries Martin and Gracia Burnham, what started out as a relaxing, once-in-a-lifetime anniversary getaway at an exotic island resort turned into one of the most horrific nightmares imaginable.

Kidnapped by the Abu Sayyaf, a terrorist group with ties to Osama bin Laden, the Burnhams were snatched away from friends and family and thrust into a life on the run in the Philippine jungle. During a perilous year in captivity, they faced near starvation, constant exhaustion, frequent gun battles, coldhearted murder-and intense soul-searching about a God who sometimes seemed to have forgotten them. In the Presence of my Enemies is a gripping firsthand account of faith, love, and struggle in the face of unnervingly casual brutality and terrible loss.