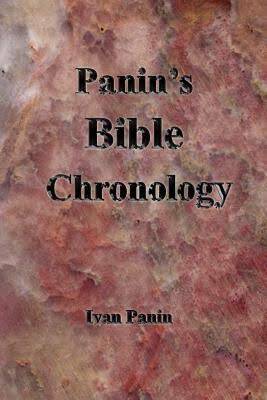 Soon after his earliest discoveries of the numerical structure, or design, of the original Hebrew and Greek texts of the Bible, Mr Ivan Panin began his research in the chronology of the Bible. In the year 1896 Mr Panin published some of his findings in a publication of his own called "The Gospel of Christ", and these are found in the issues of January, February, and March. He further expounded the subject in a special publication, a periodical, called "Bible Numerics", in the issues of March-April, 1916, pp.3-17 and May-June, pp 3-13 of the same year.

The first edition of Bible Chronology was printed for Mr Panin in 9123 by the Armach Press, Toronto. The Chronology was reprinted in 1939, the reprint being made in Great Britain by Green & Co., Caxton Press, Lowestoft. After this reprint Mr. Panin commenced the work of correcting and revising the book for a second edition, but being overtaken by an illness which brought his ardent labours to an end, he was prevented from bringing his work on the Chronology to completion. It has thus become the duty of the present writer to continue the work of preperation for the press.

All matter extraneous to the subject has been eliminated in this edition; the word "Jehovah" is rendered "Lord" throughout the book; typographical errors have been corrected.

The book has been supplemented by an Index of Scrupture Passages which will facilitate its use.

Results of future work of numerical analysis of passages in the Hebrew text which would necessitate corrections of any of the dates given in this book would not seriously affect the result in general.

the writer wishes to acknowledge the help received from the Rev.H.F. Schade in the work of revision, his assistance made it possible to present the book in this its second edition.

The new edition of Mr.Panin's great work, Bible Chronology, is sent forth in the name of our Lord and to His praise in the conviction that it will be a blessing to all who love God and find their delight in meditating on His Word.